“No matter how long the night, the morning always comes.”

Gray is pleased to present Nocturne, a solo exhibition of new sculpture by Jaume Plensa. Debuting nine of the artist’s latest works in stone, glass, steel, and bronze, Nocturne explores the artist’s range and mastery of sculptural portraiture.

In Nocturne, a word evocative of the night, Plensa navigates the symbolic dichotomy between lightness and darkness. The artist presents his newest body of work in a gradient of material density, beginning with the most substantial sculpture crafted from black basalt and bronze, and concluding with light, ethereal figures in stainless steel and Murano glass. Contemplating the extraordinary challenges of the present day in these terms, Plensa maintains, “Even after the longest night, the morning always comes.” Whether embracing or opposing the intrinsic qualities of his materials, Plensa’s exhibition of sculptural portraits symbolizes the potential for hope to emerge from a place of total darkness.

Like Water in the Hands of the Sculptor
By Catherine Millet 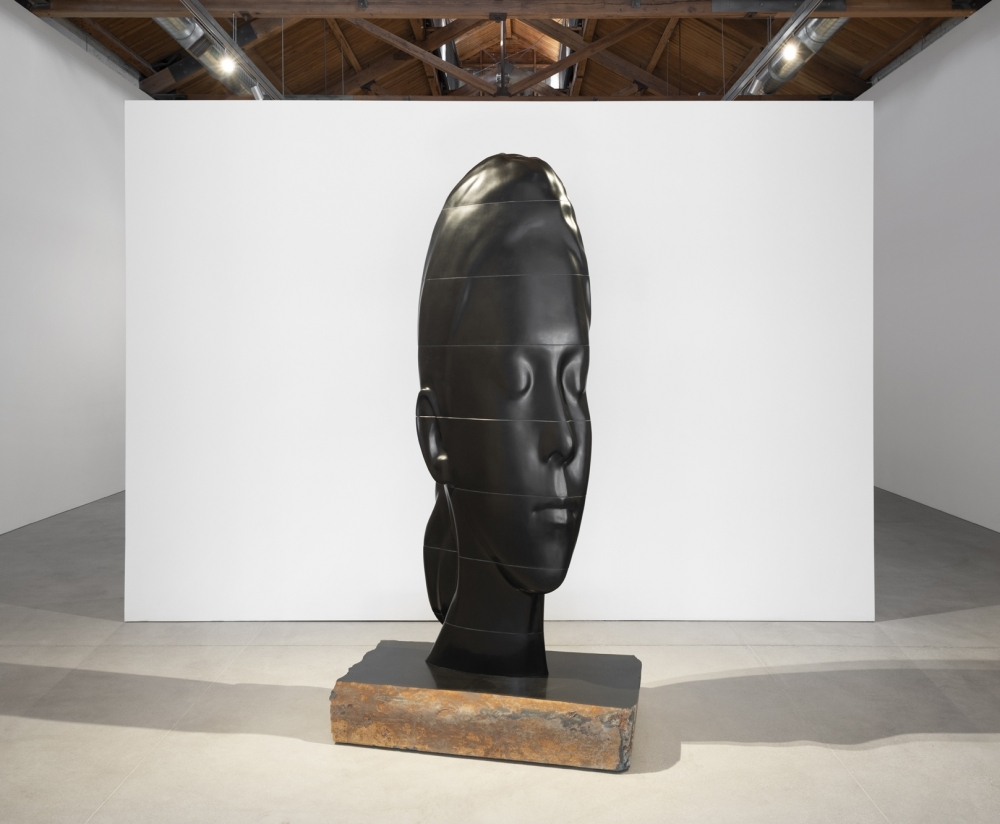 In an ancient book on El Greco, I came across a quote by José Ortega y Gasset in which he describes the painting, The Martyrdom of Saint Maurice, as “a bit of material burst into flames.” How could I not think about the sculptural portraits of Jaume Plensa and their effort to liberate themselves from the weight of the material from which they are made?

One of them, Minna–elongated like the ones in El Greco’s paintings–welcomes visitors into the exhibition about which this essay was written. Minna is sculpted in basalt, a particular type of volcanic rock created from magma. The molten material cools when in contact with air, but its surface, black and polished, retains a shimmer of light. Of course, Minna has her eyes closed but not looking skyward like those of the El Greco’s figures, so it may not be the flame of spiritual love that consumes her. But how can we tell what burning secret causes her eyelids to discretely droop? 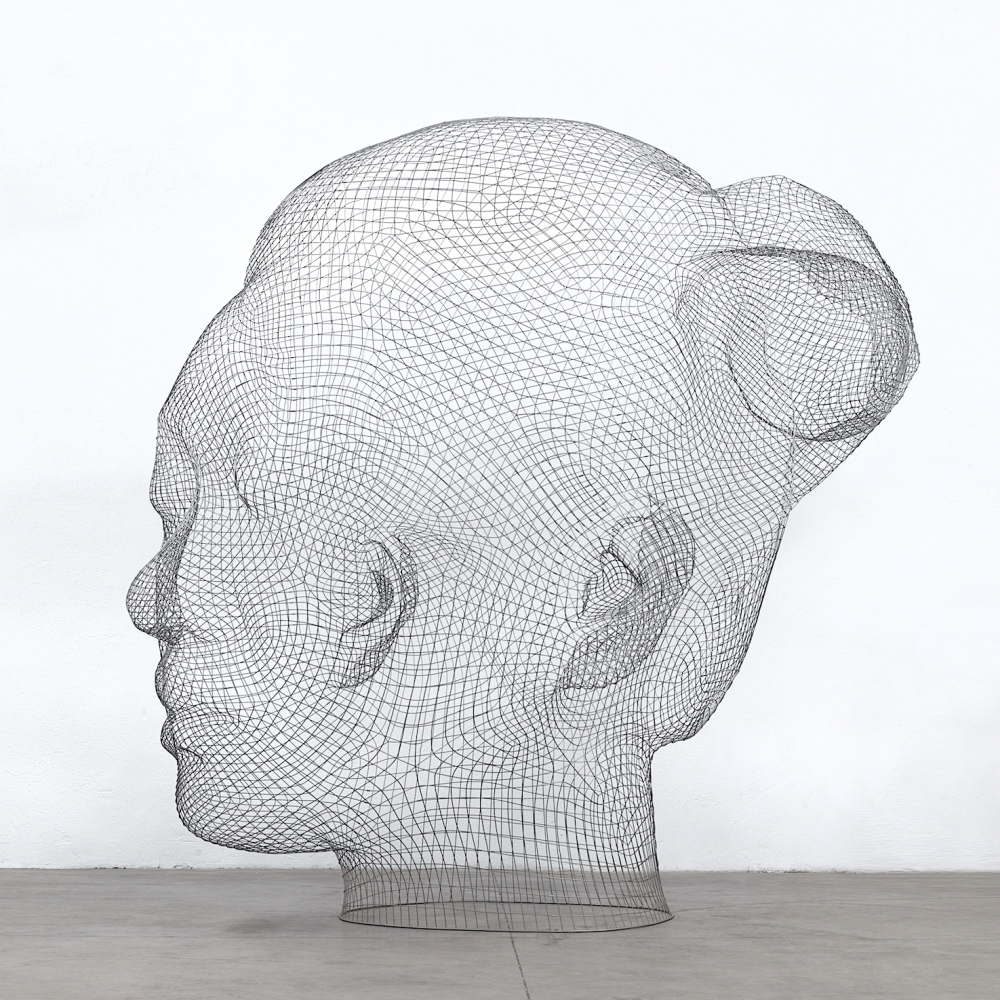 This new exhibition by Jaume Plensa is surprisingly different from those that preceded it, which on many occasions also presented us with the heads of serene young girls, comparable to that of Minna. The materials from which they are made–iron, bronze, steel, marble–tend to “dematerialize” through different processes. Plensa’s materials undergo extreme manipulation: stretching or thinning, as if the sculpture sought to join the two dimensions of the sketch, polishing, elevation or suspension, and even hollowing, as is the case of the steel mesh heads. Everything is done so that the mass of the sculpture becomes an intangible weight, like that of the inner character of these young girls. We are invited to enter a state of concentration close to theirs and to return to our own intimate thoughts. Recently, the artist declared that his pursuit is defined by the fusion of the intangible and the physical. Indeed, isn’t he the sculptor who paradoxically communicates with us about music and poetry above all else? Who even carves some of his sculptures with letters or musical notes? Yet, here it seems that the material seeks to regain some of its identity.

Rui Rui and Julia appear as massive yet fragile steel mesh apparitions whose shifting light coupled with our own movements around them constantly reinvents their form. Just as their appearance cannot be static, the content of their “conversation,” to use the artist's words, will never reach us, forever dissolved in the narrow but irreducible void between them. 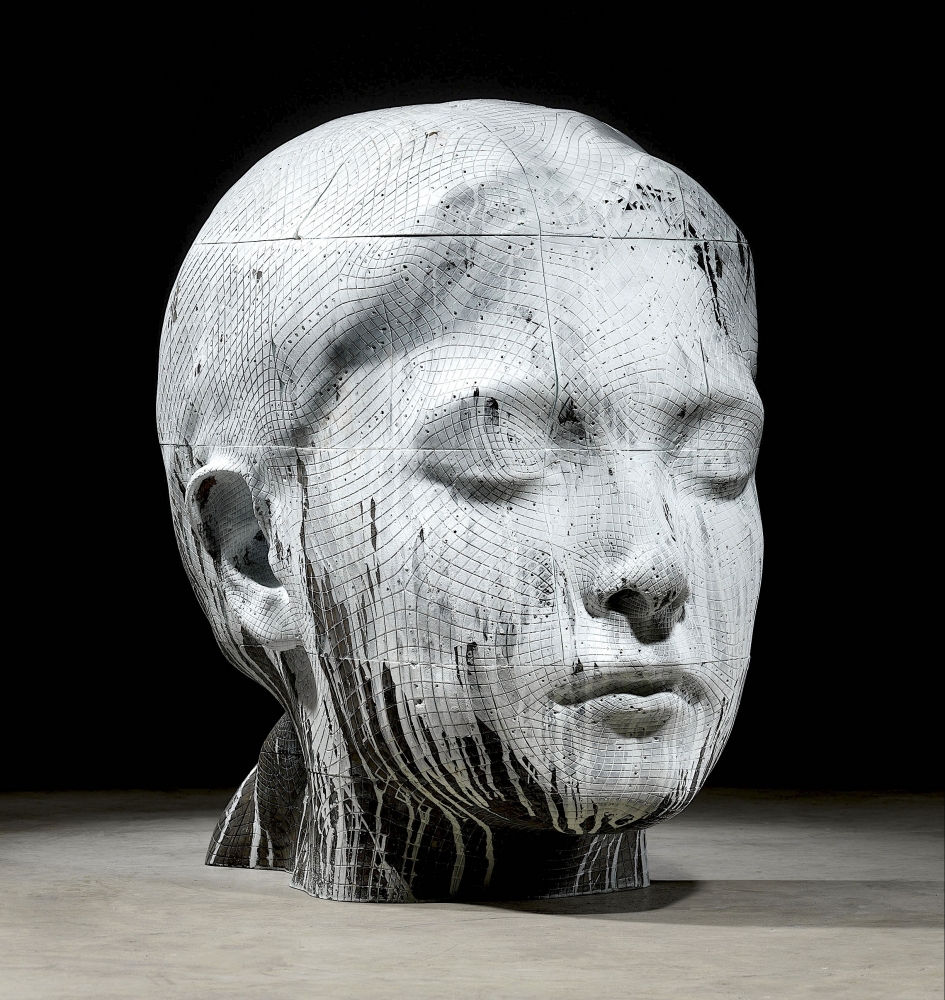 Conversely, other pieces in the exhibition express more of their physicality: covered in white paint, Anna, Laura, Irma, Rui Rui and Lou retain the marks engraved into their surfaces from the mesh molds used when the objects were cast in bronze.

Standing in front of the five bronze heads placed on a large plinth, it is difficult to avoid recalling tragic images in our minds. The connection is made spontaneously to the severed heads exhibited in our museums, starting with that of Saint John the Baptist, of course, which rests on the plate that Salome proudly brandishes in a scene that we have contemplated so many times, animated by a combination of horror and fascination. In a sense, here is Salome subjected to the martyrdom of Saint John. We recognize the faces of these young girls because they have been the subject of other versions, they have become familiar to those who follow Plensa's work, and we always find them in the same peaceful expression. But it is precisely this expression that painters have represented often throughout history, and it surprises us every time: when the horror of the ordeal has since faded, then comes tranquillity or indifference, of death.

“Sculpture is the relationship between the material and the immaterial; the visible and the invisible.” 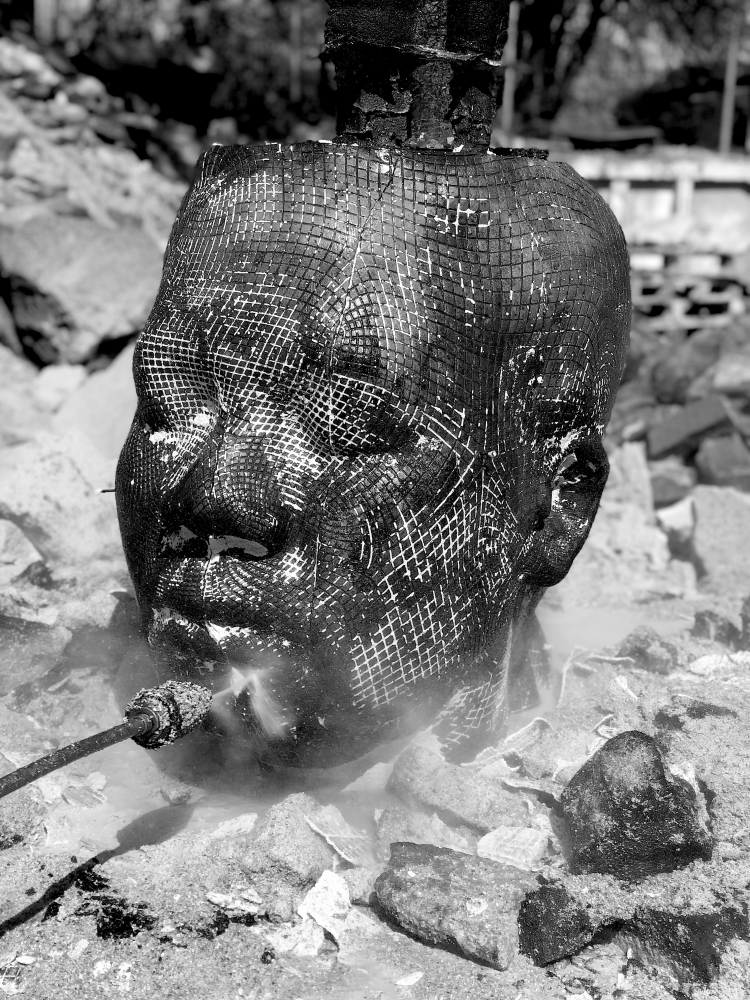 It is always difficult to relate a piece to the cultural context that gave birth to it; some artists embrace it while others fear being locked in. Jaume Plensa has sufficiently shown how certain distant references, in particular that of Egyptian statuary, had intervened in the formation of his gaze, so that we can now evoke, with his forgiveness, Catalan Romanesque art. Visit the National Art Museum of Catalonia in Barcelona and you will be struck by the number of towering figures you will come across. This is a formal analogy that had imposed itself on me before certain depictions of the Virgin and the Child of the 12th century. Their steadfastness, their hieraticism, the sweetness of their expression and sometimes even their blind eyes which seem lowered towards the child or the faithful make them appear to be the ancestors of Minna. I think now about representations of Christ’s head on the cross. Like Plensa’s figures in steel mesh, they generate a kinetic effect before the eyes of the visitors who walk around them. From one angle, the expression will be that of abandonment or rest, under another of pain, under another the figure seems to tell us that it wants to close its eyes to shield itself from our excessive curiosity! The hieratic heads like that of Minna are sphinxes, their mystery remains whole. Even more confusing are the heads whose message changes depending on whether they seem to bow to listen to us or, on the contrary, to evade our excessive attention. So ready to surrender, and immediately withdraw. We understand what the artist means when he talks about “wanting to grab the water with his hands.” 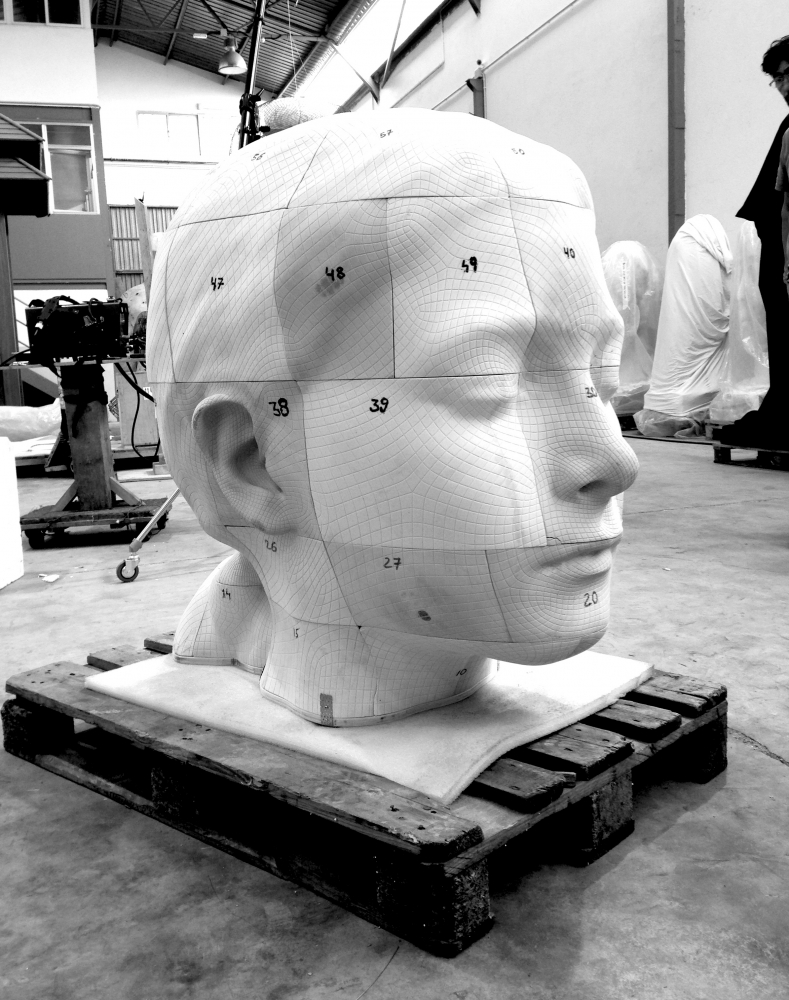 These personalized sculptures don't belong to the model as a whole as much as to who she is, who she was, at a specific time in her life. One day when I asked the artist about the choice of his models, his answer was: “Tradition is feminine, everything that is important and that marks our life is feminine. So, I decided to make portraits of girls between the ages of eight and fourteen. It's a time when beauty changes very quickly so that every time I do a portrait, soon after, the model, in a way, no longer exists.” The tragedy in Jaume Plensa’s work is not part of a brutal image, it is part of a soft portrait, an image witnessing the relationship to time that is the foundation of the tragic human condition.

Eurydice, the nymph of the trees, comes to mind. In desperation after her death, Orpheus brings her back from the underworld. The gods, however, set one condition for her resurrection: that Orpheus does not look upon Eurydice during the journey. Alas, he failed, and the one he thought he could soon hold in his arms disappears immediately. Who would blame an artist for wanting to see? That is their role. Who better than a sculptor who captures matter to give shape to what we all want to see? Jaume Plensa is this very sculptor who communicates to us that the oldest wood, the hardest stone, the densest metal flows between the fingers like water, because we will never seize the spirit that inhabits them.

Catherine Millet is a French writer, art critic, curator, and founder and editor of the magazine Art Press, a French magazine that focuses on modern and contemporary art. Millet's essay, "Like Water in the Hands of the Sculptor," was originally written in French on the occasion of Jaume Plensa: Nocturne. Excerpts from this essay were translated for this online viewing room. 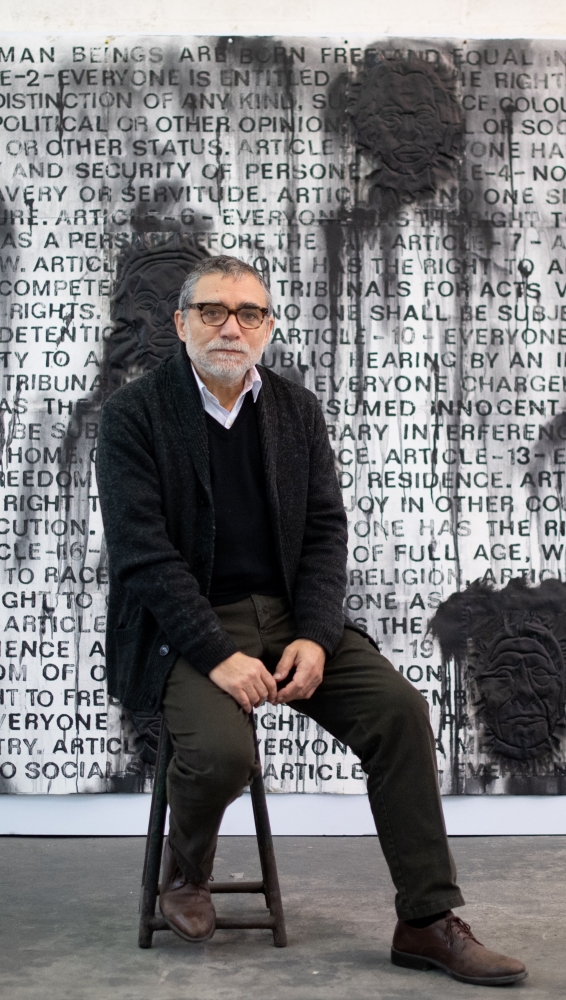 Over the past thirty-five years, Spanish artist Jaume Plensa (b. 1955) has produced a multifaceted body of work creating sculpture that speaks to the capacity and beauty of humanity, often bringing people together through the activation of public spaces. His celebrated public projects, such as the iconic Crown Fountain in Chicago and Echo in Seattle’s Olympic Sculpture Park, are landmarks in cities across the world, including in Calgary, Chicago, San Diego, Montréal, London, Paris, Dubai, Bangkok, Shanghai, and Tokyo. Most recently, installations of his monumental sculptures include Behind the Walls at historic Rockefeller Center in New York City and the Museo Nacional de Arte in Mexico City, Julia in Plaza de Colón in Madrid, Voices permanently installed at 30 Hudson Yards in New York City, and Dreaming in Toronto. His forthcoming projects include Laura to be unveiled in Century City, Los Angeles and Utopia at Frederik Meijer Gardens & Sculpture Park, Grand Rapids, Michigan as well as the permanant installation of Behind the Walls at the University of Michigan Museum of Art in Ann Arbor. 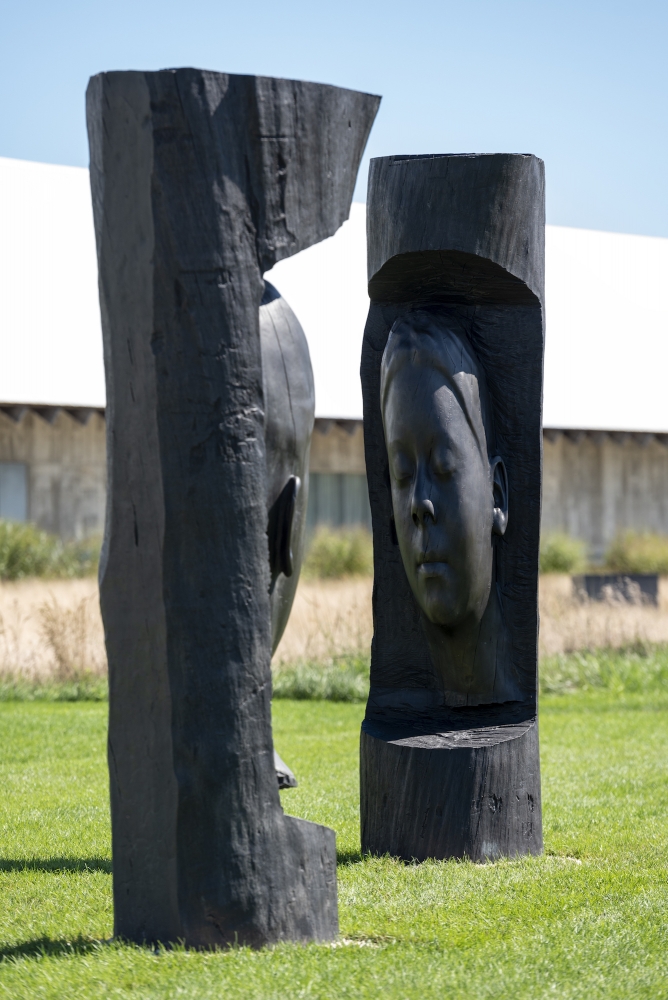 Running concurrently to Nocturne, The Parrish Art Museum’s exhibition Field of Dreams debuts four bronze portraits by Jaume Plensa: Carlota (oak), Julia (oak), Laura Asia (oak), and Wilsis (oak). Assembled together in the Great Meadow, the four sculptures welcome visitors to walk among them. By depicting his subjects with closed eyes, Plensa seeks to evoke a sense of silence and stillness—a concept central to the artist’s practice. For the artist, the installation is only complete when a viewer enters the wide open space of the Great Meadow and walks amidst the sculptures in a moment of quiet reflection. Standing over nine feet tall, these totemic works are the first in a new series of portraits carved directly into tree trunks then cast in bronze.

The volume and grain of the wood itself was integral to Plensa’s process: as the artist recalls, “When I found those beautiful oak trunks in France, I immediately thought it was beautiful to find the portrait each were hiding inside.” By including the trunks as part of the sculpture, Plensa draws the connection between humanity and nature. The wood acts as both the medium and subject of the sculpture while the irregular surfaces, scattered splinters, and cracks in the wood are captured in bronze, evoking the artist’s wistful movements between ephemerality and permanence.

Learn more about this series here.